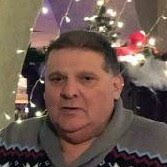 Born in Old Forge, he was the son of the late Dominic and Rose Calvitti DiVecchia.  He was a graduate of Old Forge High School and a U.S. Navy veteran.

Frank was a very loving and affectionate person. He was an avid movie buff of all genres, a car enthusiast, and a Patriots football fan.

The family is deeply thankful to Frank’s doctors and the second floor ICU nurses of Commonwealth Health Wilkes-Barre General Hospital for the outstanding care and comfort they provided to Frank.

In addition to his parents, Frank was preceded in death by his brother, Nicholas DiVecchia.

A private memorial service was held at Prince of Peace followed by internment at Old Forge Cemetery.

In honor of Frank, memorial contributions may be made directly to St. Jude Children’s Hospital.

Share Your Memory of
Francis
Upload Your Memory View All Memories
Be the first to upload a memory!
Share A Memory