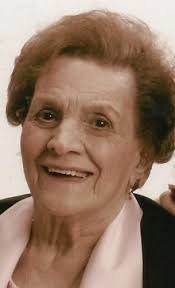 Edith Stassi, of Old Forge, died Tuesday, June 3, 2014, at Regional Hospital of Scranton surrounded by her loving family. She was the widow of Anthony J. Stassi, who died in 1989.

Born June 20, 1921, in Old Forge, she was a daughter of the late Peter and Rose Gabello Brigido. She was educated in the public schools of Old Forge and had worked at the Butler's Silk Mill, Old Forge.

Edith's kind heart and generosity were expressed through her passion for cooking and feeding others. Nothing in life made her happier than being surrounded by her family. She was a selfless Italian mother who always put others' needs before her own. She left behind many who adored her and called her "Ma."

She was preceded in death by four brothers, Carl, Guy and Americo Brigido, and Leonard Brigido, who was killed in World War II; three sisters, Mary Monelli, Lucy Tagliaterra, Ann Brigido; and also several other siblings who passed during infancy.

The family especially thanks Margaret Ann, Sandi, Agnes and Marianne.

The funeral is scheduled for 9:30 a.m. Friday from the Louis V. Ciuccio Funeral Home, with a Mass of Christian Burial at 10 a.m. in St. Mary's Church, Prince of Peace Parish, Grace Street, Old Forge. Interment will be in Old Forge Cemetery. Friends may call 5 to 8 p.m. Thursday.

To plant a beautiful memorial tree in memory of Edith Stassi, please visit our Tree Store

Share Your Memory of
Edith
Upload Your Memory View All Memories
Be the first to upload a memory!
Share A Memory
Plant a Tree