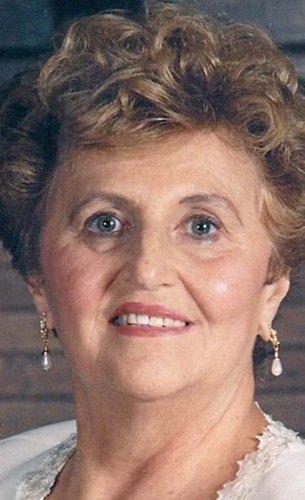 Phyllis Lockett Chase, R.N., C.R.R.N., 79, of Old Forge, died Saturday at Regional Hospital of Scranton following a brief illness. Our mom died peacefully surrounded by her beloved daughters, family members and her best friend and travel companion, Carmine LaBrutto. She was happily married for 49 years to the late Louis Chase who passed away April 27, 2005.

Born in Moosic, she was the daughter of the late Maxwell and Marion Major Lockett. She was a graduate of Moosic High School class of 1952. She was a cheerleader, enjoyed roller skating with her friends, and played in the school's band. She was crowned the first May Queen in Moosic. She graduated from the Scranton State Hospital's School of Nursing and went to work at Moses Taylor Hospital. After her children were born, she stayed home to care for them. Years later, she worked for Dr. Marmo and Dr. Sorokanich in Old Forge and Allied Rehabilitation Center, Scranton. Phyllis enjoyed her nursing career and was named "Who's Who of American Professional Women." She was a member of the Taylor Public Library Book Club.

Phyllis's life was devoted to her daughters and grandchildren. She attended all of their softball and basketball games, even playing in mother-daughter competitions. She lived for the New York Yankees baseball season and enjoyed attending their spring training in 2006. Her favorite spots to visit were Villa Roma, N.Y., Turtle Cay, Va., and anywhere in Florida. She will be missed most of all by her furry babies, Bella, Max and Dallas.

The family would like to thank the ICU unit of Moses Taylor Hospital and the Special Care Unit at Regional Hospital of Scranton, Dr. Yager, Dr. Brown, Dr. Sunday and especially the nurses and interns that took special care of Phyllis.

The funeral arrangements have been entrusted to the Louis V. Ciuccio Funeral Home, 145 Moosic Road, Old Forge. Viewing hours for family and friends will be held Tuesday, 5 - 8 p.m.

A Memorial Tree was planted for Phyllis
We are deeply sorry for your loss ~ the staff at Louis V Ciuccio Funeral Home
Join in honoring their life - plant a memorial tree
Services for Phyllis Lockett Chase
There are no events scheduled. You can still show your support by planting a tree in memory of Phyllis Lockett Chase.
Plant a tree in memory of Phyllis

Share Your Memory of
Phyllis
Upload Your Memory View All Memories
Be the first to upload a memory!
Share A Memory
Plant a Tree